Perchym, are digital binaural frequency recordings. Included in this site are 25 different tracks which are dedicated to achieving natural support and or relief for various physical or mental state of well-being. Such as focus, calming, sleep, physical pain etc… Listening through earplugs or earphones, these tracks stimulate the brain with pure frequencies through different beats in each ear simultaneously. Highly effective and known for thousands of years, these frequency recordings on our Uber House site are safe and free to anyone who wishes to improve their brain function, well as their physical, mental health. Simply plug in your earbuds or earphones, select any track you wish and enjoy (listen every day for 30 days for maximum effect).

*The word binaural means “having or relating to two ears”. This represents the process, which works by simultaneously sending a marginally different sound frequency to each ear through headphones. Brainwave entrainment happens inside the brain, and is caused by a physiological response. Upon hearing two tones of different frequencies – sent simultaneously to the left and right ears – the brain perceives a third tone based on the mathematical difference between the two frequencies. The brain then follows along at the new frequency and produces brainwaves at the same rate of Hertz (Hz).

For example: if a 200 Hz sound frequency is sent to the left ear, and a 205 Hz to the right ear, the brain will process those two frequencies and perceive a new frequency at 5 Hz.

The brain then follows along at the new frequency (5 Hz), producing brainwaves at the same rate of Hertz (Hz). The technical term for this process is ‘frequency following response’.

Remember, the brain will only respond in the intended way if it receives the sound frequencies at the same time through headphones

**Modern science has begun to recognize what the ancient mystics and wise men have told us for centuries; that everything is in a constant state of vibration. Everything down to the smallest physical particle to the things we cannot not perceive with our (yet) limited senses. The most elemental state of vibration is that of sound. Everything has an optimum range of vibration (frequency), and that rate is called resonance. When we are in resonance, we are in balance. Every organ and every cell in our precious body absorbs and emits sound with particular optimum resonate frequency. 432hz and 528hz tuned music creates resonance in our physical, mental, emotional and spiritual body.

*The Ancient Discovery of the Benefits of Rhythm & Repetition
What most people don’t realize is that although the creation of binaural beats music has only been possible through technological advancement in the last 100 or so years, the use of this natural science dates back thousands of years.

Ancient cultures were aware of how the brain could be entrained through sound repetition well before modern science was able to prove the process.
Now of course, in times past, societies didn’t refer to this science as binaural beats, but what they did know was that consistent, rhythmic sound had extremely powerful healing and spiritual benefits.

Scientist Melinda Maxfield, PhD, conducted research on the drumbeats used during rituals of ancient cultures and found that they generally beat at a steady rate of 4.5 beats per second.

This consistent beat induces a trance-like state for the tribe, due to the brain shifting into a 4.5 beats-per-second brainwave frequency, which is a low Theta brainwave state, as you’ll learn about below.

For example: through the use of repetitive drumming and chanting, Tibetan monks, Native American shamans, Hindu healers and master Yogis have been able to induce specific brainwave states for transcending consciousness, healing, concentration and spiritual growth. It is to be noted that after the era of classical music, we entered the phase of the industrial revolution.

Andrew Newberg, neuroscientist at the University of Pennsylvania, and author of “How God Changes Your Brain”, discovered that while we are deep in prayer or meditation, activity in our parietal lobes drops to almost nothing.
The parietal lobe is responsible for sensory awareness and orients us in the world. Newberg believes that the drop-in activity during meditation and prayer explains that sense of oneness we feel with the universe when engaged in these focused activities.

The Founder of Binaural Beats

The way binaural beats work was first discovered in 1839 by a Prussian physicist and meteorologist named Heinrich Wilhelm Dove.

It wasn’t until 1973, though, that biophysicist Doctor Gerald Oster brought the technology into mainstream awareness in a paper called ‘Auditory Beats in the Brain’ (Scientific American, 1973). In his paper, Oster concluded;
It is possible that hormonally induced physiological behavior changes may be made apparent by measuring the binaural-beat spectrum.

More than forty-five years later, with extensive research by scientists and sound engineers later, the science of binaural beats (brainwave entrainment) is used by people all over the world to entrain the brain into different states that contribute to stress relief, focus, aiding sleep, pain relief and much more.

Please note: The last three are ambient healing tracks to be listened to via speakers. 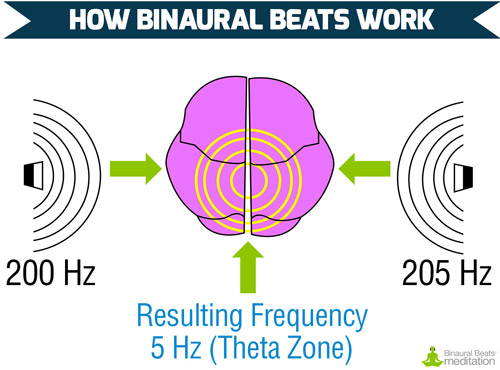 Ambient Music Tracks to be listened to via speakers, as they are different to the others which require ear-buds or earphones

With much gratitude to all involved in the production of this website. A special thanks to WebCreationUs.